A: Keelung Ghost Festival is actually only one of the most celebrated nights of a month long celebration called ghost month. Ghost month begins every year on a different date as it starts on the first day of the seventh lunar month. Typically this makes the festival fall within the months of July- September. During ghost month the gates of hell are opened and ghosts are allowed to wander the earth for one full month. Keelung has developed the richest and biggest celebrations for ghost month even though it it is possible to celebrations throughout the city pertaining to ghost month. Some of the more common celebrations include making offerings to deceased ancestors (food), burning ghost money, and letting go of water lanterns. Each one of these activities can 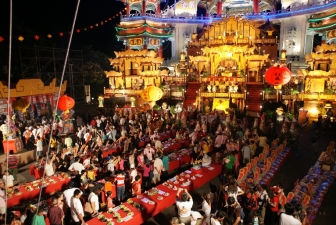 be found at Keelung Ghost Festival.

In Keelung the opening of the Chupu temple gates marks the marking of the ghost’s arrival. When the ghosts are to make their return home the temple gates are closed and they are condemned back to hell.

In other cities such as Yilan’s Toucheng there are different traditions.One of these typical tradition of the ghost festival has just returned to the festival because of safety concerns in 2004 is the “Grappling with the Ghosts”. This festival includes constructing 30 meter high wooden pillar platforms called Gujhan. On top of these Gujhan offerings are made and hung. After they are hung they are crowned with a flag and a gold flag. The danger in this activity is climbing the Gujan pillars are they are greased to make them more difficult to climb. In addition to the hanging of the pastries on the pillars at midnight you will find men competing to climb up the Gupeng. The man who makes it to the first platform first must knock down all the hanging pastries, which are sometimes devoured by the poor on the streets. The first man to make it to the top and retrieve the gold flag and medal is the winner of the entire festival. It is important to note that this is no easy task.

We found this photograph while browsing through study abroad photos on Flickr. This photo of Lotus Pond was taken by Lauren in 2009 during the UGA Athletic Training Study Abroad in Taiwan.